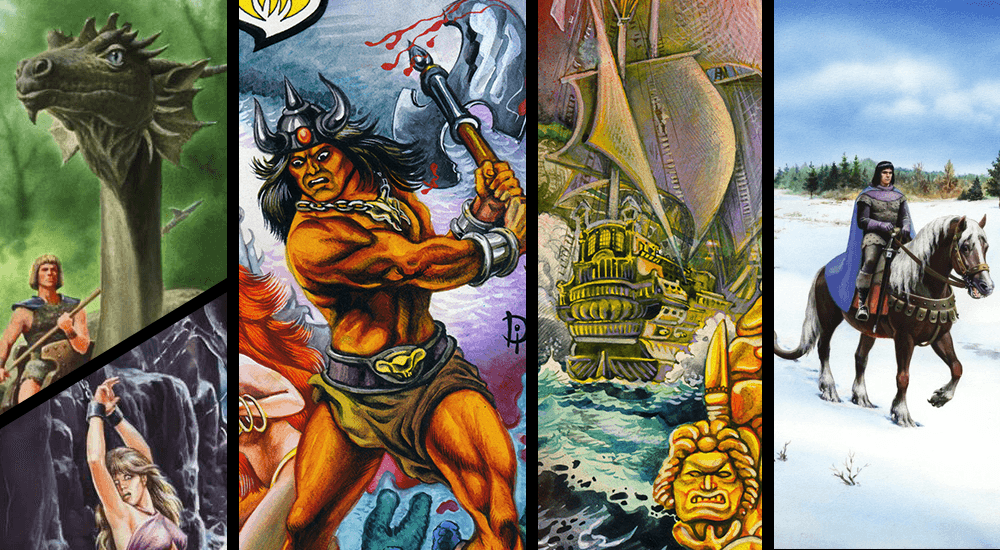 "If you grew up during the 80s or 90s, chances are you had a few Choose Your Own Adventure books on the bookshelf. Or maybe you had seen some at school, or perhaps your best friend’s older brother had a box of them hidden away somewhere."

"Gamebooks weren’t just a craze; for a generation of people they were a cultural phenomenon, part of the shared zeitgeist."

"You know you’re reading a gamebook when the book starts talking to you, asking what “You”, the reader, wants to do next. A typical choice might go like this: “If you want to investigate the strange noise in the corridor, turn to page 34. If you want to run the other way, turn to page 5.” Gamebooks weren’t meant to be read through from beginning to end. Instead, you kept reading until you reached a fork in the story, turning to a different page every time you were asked to make a choice, until you reached the end of the book. Except most gamebooks had more than one ending, so once you’d finished reading the first time you could go back and start over again, this time making an entirely different set of choices, resulting in a completely different story."

I related instantly to these quotes by Martin Plowman's brief history of gamebooks.

Personally, I fell in love with the gamebooks genre as a kid. It stuck with me over the years. Now, led by nostalgia, I maintain and develop the Bulgarian gamebook community website in my spare time.

I have wanted to create a mobile gamebook since 2011. Those were the times when Tin Man Games showed for the first time how great gamebooks can look adapted for Android and iOS smartphones. 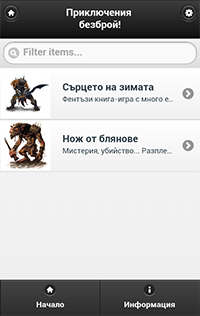 My initial idea was to create an HTML5 multiplatform app that serves as a free-read mobile version of all Bulgarian gamebooks published during the 90s (concepts in jQuery mobile are on the left). There were some difficulties that I didn’t think through at that time. First, get permission by all the authors whose texts I wanted to publish. Second, most of the gamebooks had character sheets and even combat systems. You had to throw dice, write down statistics, code words, items and what not. Having the text as a free-read wasn’t satisfying enough for me.

My second attempt was when I built a web tool for parsing the text of the old gamebooks. Automatically extracting the sections and having some sort of generic character sheets for you to write down stuff. I chose ‘Hwarang and Kumiho’, a short gamebook story by Leidrin Sweever as my ‘test bunny’. I asked him and he let me experiment with his text. I used Java and Javascript, reached a certain milestone of the project that served its purpose and I ditched it due to lack of time to polish it enough and make it likeable. 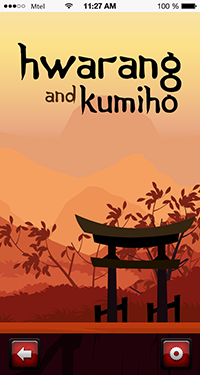 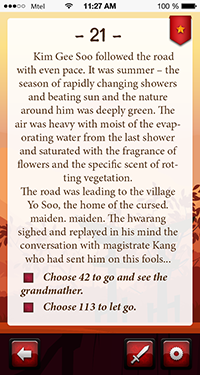 I was getting annoyed at the constant feeling for lack of completion. Finally, I decided my approach should be more individual. On one hand, I had to build a core engine suitable for most gamebook use cases: having sections, making choices, modifying character stats, preserving types of information (e.g. code words, items, currency), checking if the character meets gameplay requirements. On the other hand, each gamebook has its unique gameplay mechanics and meta rules which had to be respected and recreated with greater detail.

Thus, my first gamebook app was born. “Hwarang and Kumiho” hit alpha (you can see some really early design concepts on the right) version exactly on Leidrin’s birthday. I managed to surprise him as I suspected he had forgotten he gave me permission to use his text for a game. He was thrilled, happy and supported me 100%.

Next on the horizon are more complex games. I am going to work on interactive maps, mini-games, strategic combats and more. Hopefully, you will enjoy them and find pleasure in the time spent with them as much as I will creating them.

Sources used in the blog post: A brief history of Gamebooks by GamesVsPlay.com