REVIEW: Rider of the Black Sun by Prime Games Bulgaria 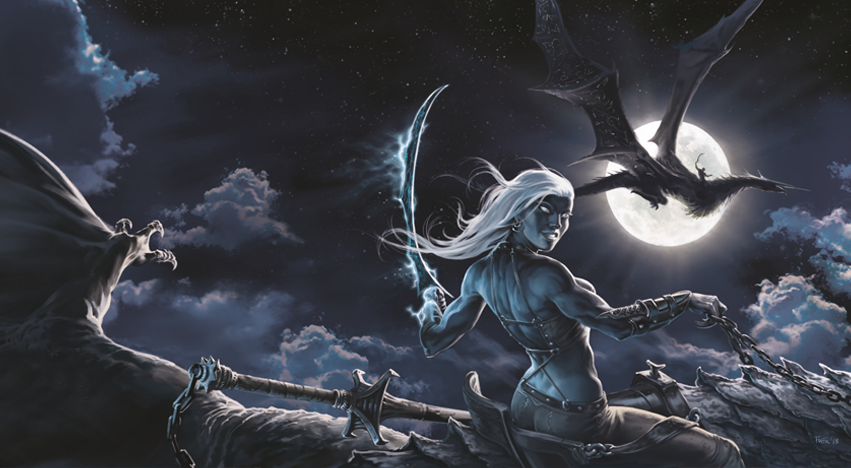 Undoubtedly, one of the highlights of the gamebook renaissance since the 2000s is the Rider of the Black Sun: Fantasy gamebook by Sven Harder and the German publishing house Mantikore Verlag.

Due to some severe bronchitis I was going through, I had some free time on my plate during the past few weeks. On our Bulgarian gamebook community’s Discord server, discussions around the Kickstarter gamebook Rider of the Black Sun were getting tense. People were sharing their progress, which item they had found, which item they had missed. Flabbergasted over puzzles and fate points, I was struck by how their discussion resembled the talks usually only gamers tend to have over some complicated RPG or an enthralling PC title. Dare to say, someone even compared the book to the vastly popular in my own country series of gamebooks from the 80s called Blood Sword.

Now, this got my attention!

I embarked on the adventure with my hardback Kickstarter limited edition and the experience I had throughout the book was… evocative to say the least.

It’s important to note that lately I have little to no urge to sit down with a gamebook, I think I suffer some sort of an oversaturation with that genre due to Prime Games and my work. A psychological barrier I have been able to overcome (or strengthen?) with this title.

The book has 16 pages of rules in total, spread out across the first five chapters. In a similar fashion to computer games, the players get educated one mechanic at a time until they begin to use them freely by the time of the last 4 chapters.

The prologue puts you right in the middle of a murder scene. One of the most powerful people in the world lies dead amidst his private quarters in the very heart of the Pyramid of Kyphi. You are without a trace of memory of your past or of what had just happened. However, this is the least of your concerns as for the moment your top priority is to escape and survive. Persecuted by worshipers of Kar, the Goddess of the Sun, only the veil of the stormy night provides you with any chance of success… 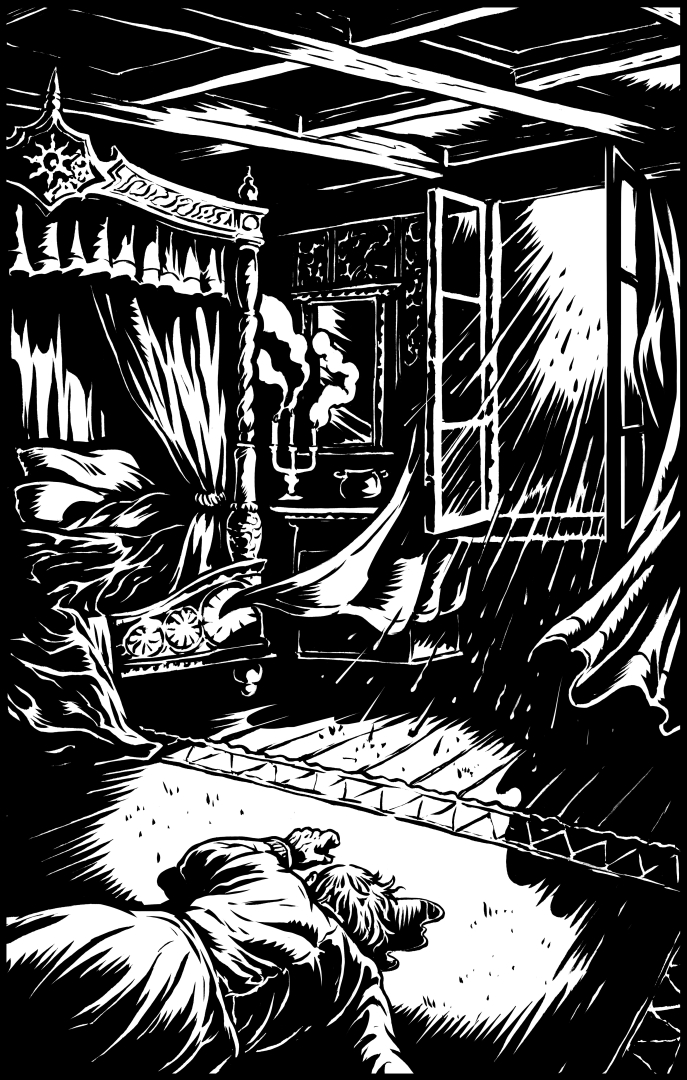 There are different choices for action and almost immediately you can find useful items. I manage to hide, stumble upon a secret compartment and unlock my very first Fate point. Fate points are like a system for over-achievers. Finding them is usually tied up with increasing character statistics and/or collecting a special item that would be of great benefit in the future.

The prologue ends in a deus ex machina fashion. Then the first chapter puts me in an entirely different place, at the very heart of another big faction – the Empire, where the worshipers of Ugar, the God of the Moon dwell. My new goal is to escape their prison situated in the lower levels of a gigantean tower.

The first chapter plays as a dungeon in the style of Lone Wolf with 3 whole Fate points for you to discover. Trying out several alternative paths, I can say that the chapter gives you few but different variations of playthrough. A great and well implemented mechanic comes instantly to my mind, and that is the...

Your adventure sheet has circles next to each box which you can fill up with a pencil once you are satisfied with the outcome of the current chapter. Thus, the value of these boxes becomes the new base for your next chapter. If you die or decide to start over, you can just erase the boxes with empty circles next to them and retry the chapter. Very convenient for replayability and collecting all Fate points within the current chapter instead of going back to the very beginning of the gamebook as most similar adventures force you to do.

At the end of the chapter I learn that my character is from the race of the Ugarith – creatures of the night, fearful of bright sunlight with ebony skin and sharp claws (not to be mistaken with vampires!) On a side note, the people of the Empire turn out to be my people or so it seems… 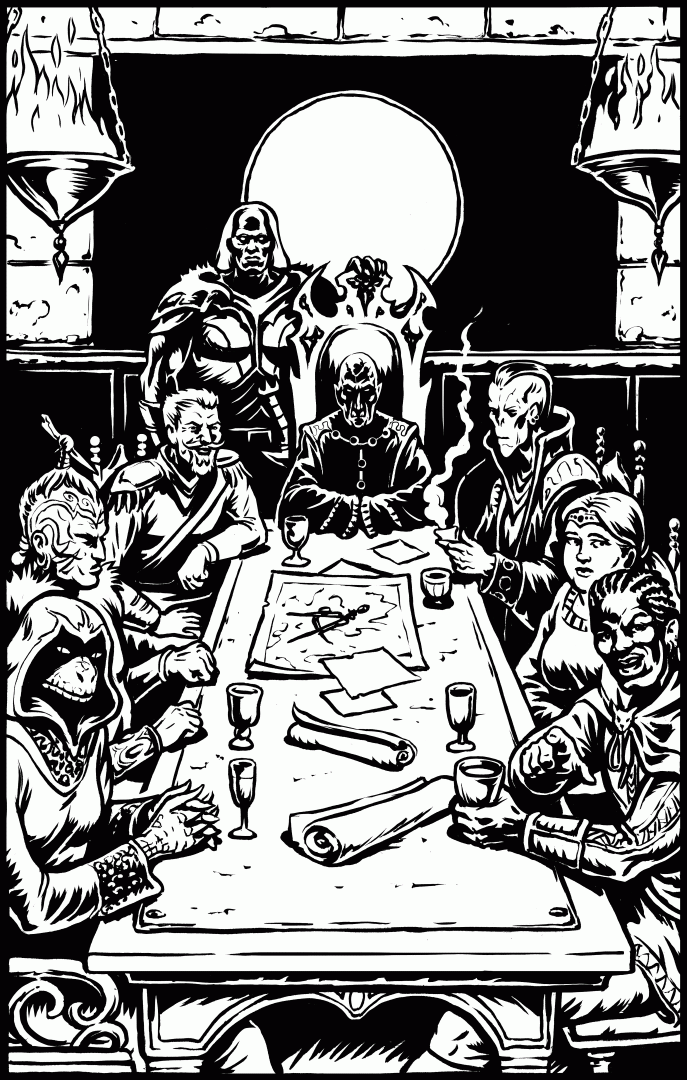 For me personally, the ending of chapter one was a turning point. The plot and the world were just not interesting enough. The author has tried to populate his world with hostile factions, various inhabitants and races, some political relations, all of which seemed a bit flat and underdeveloped to me. The following chapters I felt lead by the nose instead of in control of my actions. The weirdest part would be the events around a river dam. I cannot even fathom nor explain in simple sentences why exactly I was there, why I did what I did in order to “save” the nearby city’s citizens, etc.

It was not the lack of interesting choices but the presence of too many fictitious ones I've noticed that I didn’t like.

With chapter 4 and beyond the story really takes off as it drifts away from political plots and its main war event and becomes a more standard adventure focused around your character. Not that I dislike the ‘Game of Thrones’ in any way but I feel the author’s strength lies into that type of storytelling.

Fan-favorite gamebook puzzles are starting to pop here and there and who doesn’t like to tickle their brain a bit!

I love puzzles, though the ones in the Rider of the Black Sun were a bit too meta for me. They are either too obvious or hidden in plain sight. What I mean by that is the solution is literally under your nose, hidden in the text or in a picture. For example, there is an old hag which tells you a riddle, a story in which three numbers are mentioned. Well, the answer is hidden in a section which you must go to, its number consisting of the above mentioned three digits. That’s it. There is no message, no real answer. Just a hidden section.

Perhaps I would have still had a positive feeling about the puzzles had it not been for the extremely irritating puzzle with a picture of five dragons spanning across two pages of the book. I found the answer to that in the additional booklet from the Kickstarter in which all the puzzles and their solutions are explained.

I must say, the book finale is well worth it. The last chapters tie the events from the beginning very well. The game becomes intriguing. The narrative variations are increasing. There is more than one ending depending on many decisions you’ve made throughout the adventure. I use the word variations on purpose because there aren’t entirely different paths as the story is essentially one but differs in its nuances.

The ending of the book successfully unravels the plot hooks. There is an epic boss fight at the end. Which brings me to one very important aspect:

The gamebook’s system is in the spirit of western RPGs, and it feels upgraded over Fighting Fantasy and the Lone Wolf series. While one might say the combat feels like Fighting Fantasy on steroids, the gear, skills and special items resemble more closely that of the Lone Wolf series. I dig the combat. But most of it I enjoyed the mini-boss fights rather than the random encounters along the path. You can avoid most of the latter in a good playthrough though. In my opinion it’s absolutely essential to spice up things by using the full spectrum of additional mechanics such as Rage, Karma and dice penalties with low level Vitality drops.

Gear, utensils, special items, you name it! It’s all there in decent amounts. Sometimes even a combination of items can provide you with a third one.

The skill system, however, I didn’t enjoy. I don’t find it an upgrade from existing skill systems and its usage felt more like a filler with several specific skills being more useful and thus stronger than others. 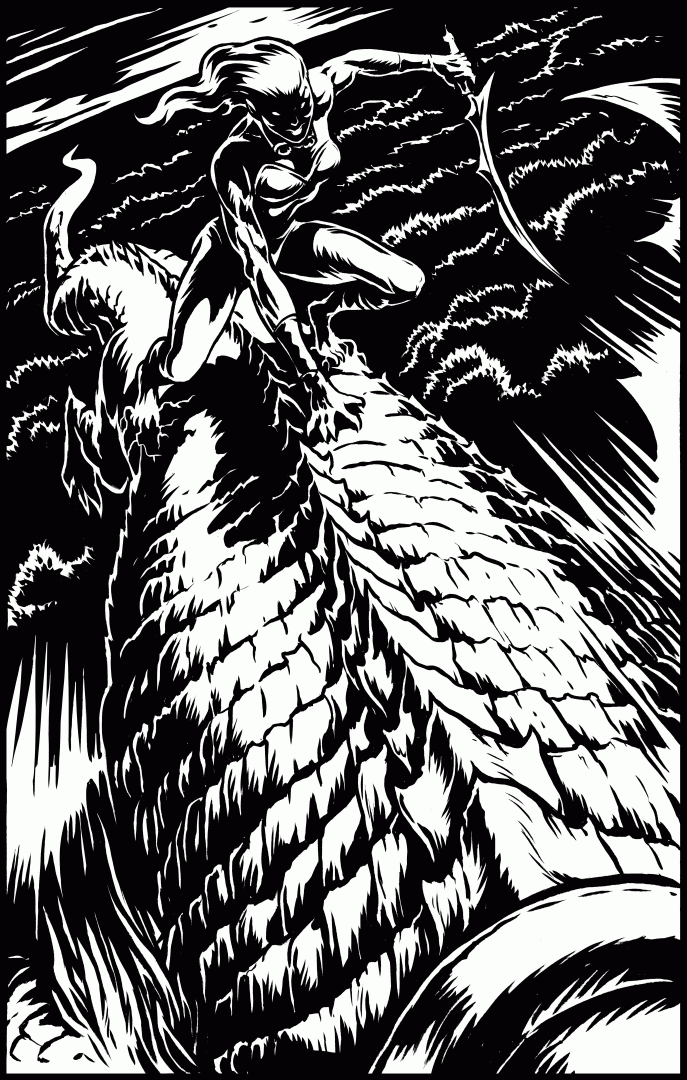 In the last chapters, an essential element is the added aerial combat against other reptile-like creatures whilst riding your dragon. It’s accomplished through choosing a sequence of various flying maneuvers that were taught to you at the beginning of the book and are schematically depicted.

There is an abundance of visually represented choices and puzzles. The gamebook format is squeezed to the maximum with mechanics such as hidden choices, invisible transitions, mirror puzzles, loops, and time travel just to name a few.

I completed the book with a 9-star rating with all Fate Points collected, which is two levels below the maximum. I cheated twice (in order to obtain the last Fate Point and the dragon puzzle I mentioned earlier).

Rider of the Black Sun is undoubtedly a must-have for gamebook lovers. It brought me many hours of gameplay and a cocktail of emotions. I highly recommend you check it out and decide for yourself! There is no doubt that the team has my respect for the titanic efforts and diligence that have been put into creating it.